The Brother LC61 compatible ink cartridges is probably one of the best sale from our 123InkCartridges online store, this value pack came with 4 different color meaning black, magenta, yellow and also cyan, our customers always refer to this as best economic option, good quality and also it supports a lot of Brother printer models, which means this Brother LC61 ink cartridge doesn’t just work on one machine only but multiple. 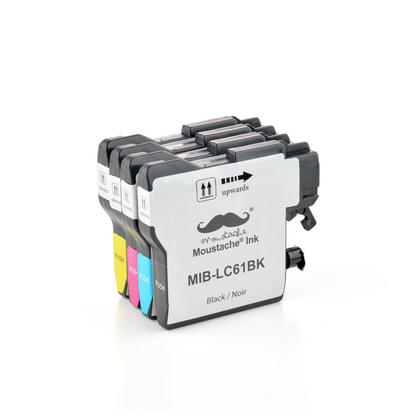 According to the product information, these Brother cartridges came nearly 15ml ink, which is approximately 450 pages for black and 750 pages for color with the 5% of coverage yield. Compared to the original equipment manufacturer price list, this item has the market value for up to 27 dollars, for me I found it quite expensive and pointless, the Brother lc61 ink compatible cartridges actually work similar to the OEM one, and since the value pack is around $11.99 for the whole complete pack, so which means $3 bucks per each cartridge, isn’t the price sweet enough to be true?

The Brother ink cartridges deliver vivid and high-quality printing performance, the cartridges itself is ozone resistant so you basically do not need to worry about the color fading after time by time. All of the Brother LC61 ink cartridges are proved to be tested under their own Brother laboratories. Their cartridges will not have issues such as clogs. So does the distribution of ink will not be unbalanced. That is why this ink is probably the best ink for all the Brother multifunction printers and no wonder the sale volume for this specific LC series cartridges are extremely high, it is definitely worthy to spend your pennies on, just a little price which is selling as low as $3 dollars per each.