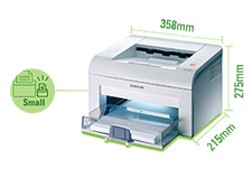 The ML-1610 Laser Printer is probably one of the most amazing printers which I would like to suggest to our blog reader. It is not only because its design which enable to fit into any personal or office environment; moreover, the toner cartridges (Samsung 1610 toner) that it used could be another factor which contribute to a better user experience. With this printer on hand, it makes paper and toner replacement become tremendously simple, which could saves you a lot of time and cost that you could ever imagine.

What about the printing performance? Do not worry, the Samsung ML-1610 printer proved to be one of the best printers for sharp text and vivid graphic which up to 600×600 of dpi resolution, perfect tool for professional document printing, it allows 150 sheet input and it has the most convenient cover which keeps your desktop look more organized rather than just having bunch of paper floating around, the most intersesting thing, this printer can even print transparencies, labels as well as envelops, so these versalities does really turn this printer become a powerful machine, rather than just a normal printer.

A little bit Pros and Cons analysis regard to the specification for Samsung ML-1610, this printer has the printing speed up to 16ppm at A4 size paper (17ppm for letter), so pretty much it is about 10 seconds/page, with its resolution up to 600×600 dpi, 150 sheets for the input tray and 50 sheet for the output. This ML1610 printer uses Samsung’s own processor 150MHz and with up to 2MB of memory, interface with USB 1.1 (compatible with 2.0 USB) and coming with the monthly duty cycles as much as 5000 sheets, which is pretty amazing. The Pros which I found from this printer: the SIZE, it is probably one of the small and powerful laser printer in which you could found in the market, however, this printer does not coming with extra features such as scanning, copying nor fax, so if you are looking for all-in-one multifunction printers, then this model will definitely not a good choice, but it does working very well for printing stuffs such as like label, document and even invoices. The toner supplies is a big part for this printer, it uses the Samsung ML-1610 toner, which is the identical number as the printer model, this toner cartridges can print approximately 3000 pages with 5% of coverage, with the price which is selling as low as $26.99 (compatible one), it will be definitely a good investment, I will cover it up all the ML-1610 toner cartridges including both OEM one as well as the compatible one at the following so you can compare the differences: