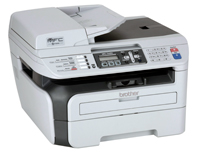 Brother MFC-7440NBrother MFC-7440N is a typically multifunctional laserjet printer suitable to work in a variety of workspaces, including the home office and work desktop. It is an all-in-one and laserjet. Brother MFC-7440N prints, scans, copies and faxes. From the CNET review of Brother MFC 7440N, the good things of it are the small footprint for a multifunction unit, the accurate character recognition, the fast text printing, the low cost per page, and the decent quality black and white scans.